Home Blog What is green hydrogen?

What is green hydrogen?

Hydrogen is increasingly mentioned when it comes to the energy transition. Hydrogen is seen as a good alternative to other energy sources. But there are different types of hydrogen, not all of which are equally sustainable. Green hydrogen is sustainable. But what exactly is green hydrogen and how is it generated? In this article we tell you everything you need to know about green hydrogen.

Before we can explain what green hydrogen is, it is important to know what hydrogen itself is. Hydrogen (H2) is a combustible gas. It is the most abundant element in the universe. Hydrogen is a very light gas, but under high pressure it has a very high energy density. It can have a density of 120 megajoules (MJ) per kilogram. This is much higher than, for example, natural gas, which has a density of 45 MJ per kilogram. A lot of energy is needed to bring the hydrogen gas under sufficient pressure. The energy used for this makes hydrogen gray, blue or green.

Although there is only one type of gas called hydrogen, there are several types of hydrogen. The difference between these types is not in the gas itself, but in the way in which the hydrogen is made. There is gray, blue and green hydrogen.

The vast majority of hydrogen that is still produced in the Netherlands is gray. Oil, gas or coal are used to make this hydrogen. This way of making hydrogen releases a lot of CO2. For every kilogram of hydrogen, seven kilograms of CO2 are released into the air. The production of this hydrogen is therefore anything but sustainable.

A step in the right direction: Blue hydrogen

Green hydrogen is produced with sustainable electricity. With this electricity, water is converted into hydrogen and oxygen. This process is called electrolysis. This does not release CO2, making it many times more sustainable than generating hydrogen with coal or gas. Green hydrogen uses electricity from a sustainable source. Generating this green energy can be done, for example, with solar panels or wind turbines. Hydrogen is also released when biomass is gasified at a high temperature. Green hydrogen is not currently being produced on a large scale, but there is a good chance that this will change in the future. 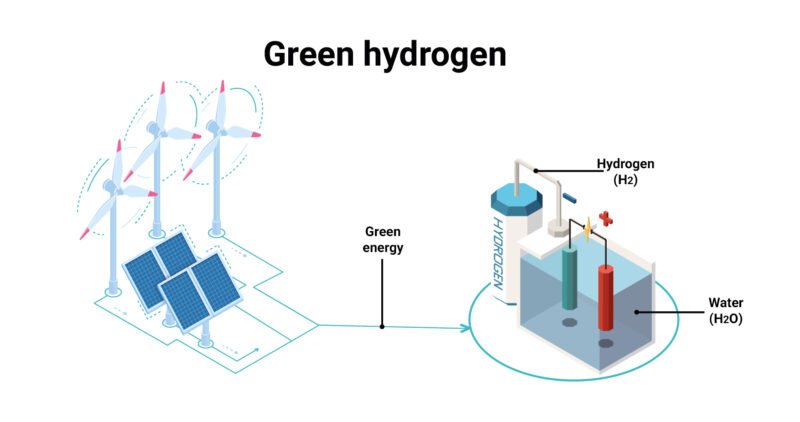 In terms of applications, green hydrogen also has an advantage over the other types of hydrogen. Green hydrogen is very pure, which means it can be used in vehicles, for example. This makes the green hydrogen more suitable for frequent use than the blue and gray variant.

When is hydrogen green or sustainable?

Hydrogen is called green if it is generated via electrolysis with sustainable electricity. No CO2 is released, so that the hydrogen has no adverse effects on the climate. The electricity used for the electrolysis is also generated sustainably. Wind energy or solar energy is used for this, for example. This makes green hydrogen a green and sustainable alternative to gray and blue hydrogen.

A special electrolysis system is needed to generate hydrogen. For example, a fully automated hydrogen generator can do this.

Are you also interested in this important development within the energy transition? Please feel free to contact us. We are happy to tell you what is possible and advise you on an effective solution. We supply both individual products and complete systems, so that we have a suitable answer for every question.